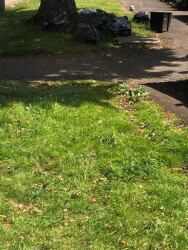 It has been there that long it has been dragged throughout the whole grove due to wildlife. I am apaulled by the Birmingham City Council.